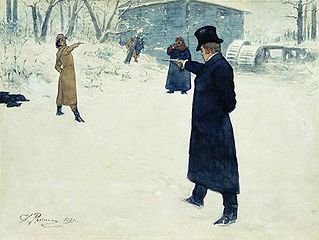 If you've been to any of our advanced courses, you likely have heard me talk about "combat dueling".  What is "combat dueling"?  It's what you're learning in most other instructors' "tactical" training courses, in my opinion.  Ok, so it's not exactly "an arranged engagement in combat between two individuals, with matched weapons in accordance with agreed-upon rules", but it's close.  Let's investigate why, and why you owe it to yourself to evaluate your goals and if you need to go much further with your training.

If you think about an old fashioned pistol duel, what are some factors that make significant, or trivial, differences in the outcome?  Let's list some examples:

In short, the skills that will help you most don't have anything to do with tactics, and have everything to do with weapons handling, including marksmanship.  You are alone, likely without cover, not moving much, trying to outshoot an opponent who is doing the same.

Now let's think of military gunfight.  You and your squad are walking along in the woods, and run into the enemy, and are on a mission to eliminate him.  What factors will impact the outcome this time?  Let's take some more examples:

As you can see, there is a drastic difference in the skills you must possess and utilize, in order to succeed.  While a dueler needs superb weapons handling skills, the soldier is more reliant on his teamwork and communications skills.  I'm not saying weapons handling is not important to the soldier, or fitness is not important to the dueler, just that there is a priority shift.

So how do you put this into perspective of the situations you are training to deal with?  If you are only training to be capable of using a handgun in self defense, such as being at a coffee shop that is getting robbed, such a situation is very analogous to the dueler.  If you are preparing to defend your neighborhood in the event of a disaster or attack, then you need skills more closely aligned to the soldier.  If you are planning on other family members aiding you in the defense of your home during a home invasion, your are going to need many of the soldier's coordination and communication skills. 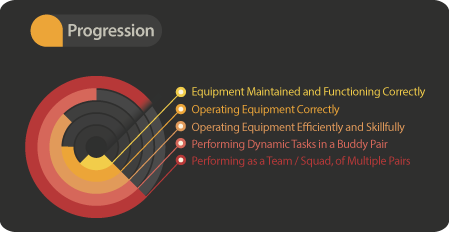 If you think of the points of failure during a dynamic engagement, while working with multiple people, you can image how the dependencies are built from the inside out, as in the image above.  First you must have the physical means to fight, whether that be your fists, your words, or your rifle, and it must be functioning correctly.  You must understand that equipment, and be able to employ it correctly.  You must be able to then use it not only correctly, but in an efficient manner that does not waste time or scarce resources.  Then you must be able to operate your equipment, while communicating and coordinating with a teammate.  Finally, your pair must be able to communicate in more complicated ways with the addition of more pairs.  Notice that this hierarchy works for anything, from a group navigating through the woods with maps and compasses, to special operations soldiers raiding a building in a distant land.

Take a hard look at what situations you are preparing yourself for, and set your goals accordingly.  Be honest with yourself, because it's very easy to aspire to thrive in situations where you will need much more than just some advanced weapons handling skills.  If that is the case, you're going to need more training than many "tactical" firearms instructors, often with only civilian or law enforcement backgrounds, have to offer.  You're going to need team oriented training, because you can't get the job done alone.