How much of the population would have to become zombies for it to be unsurvivable?

Something fun for Halloween:

Zombie movies often depict a situation in which so much of the population has been zombified that the few remaining normal people have little or no chance to survive. But just how hard would it be to survive in comparison to set amounts of zombification?

This might sound, at first, like a useless discussion, but I think that few people have actually considered the figures.

Someone could argue that if the zombie-causing influence was indiscriminate, such as a virus, that a portion of the people left would be those incapable of killing zombies (e.g. children, elderly, pacifists). However, the same is true of zombies in this case. A portion of the zombie population similar to the portion of non-zombie-killers should be zombies incapable of killing people. (Although pacifists turned zombie certainly could. Once again pacifists ruin it for all of us.) 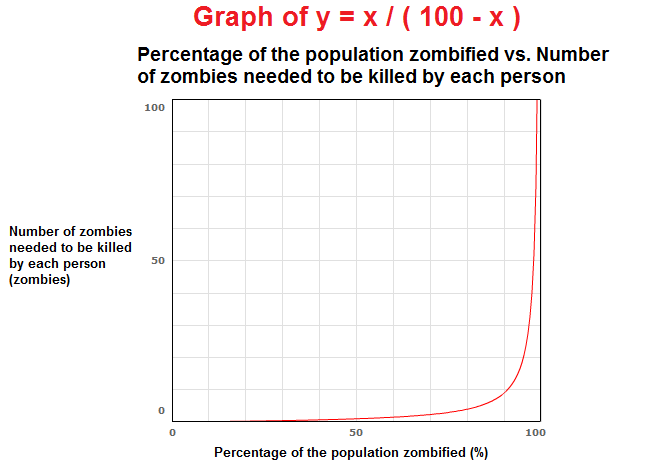 As you can see from the graph, until the percentage of the population zombified gets VERY close to 100%, killing all the zombies should not be much trouble.

Keep in mind that as the percentage of the population zombified increases, the immediate access to resources such as gas and bullets actually increases. This is because in a survival situation, it's completely ethical to loot supplies (e.g. food, gas, weapons, ammunition) from those who are now zombies. Zombies can't use that stuff anyways.

Now, with this new-found confidence, have a safe and zombie-free Halloween!