Everything you need to know about magazines. 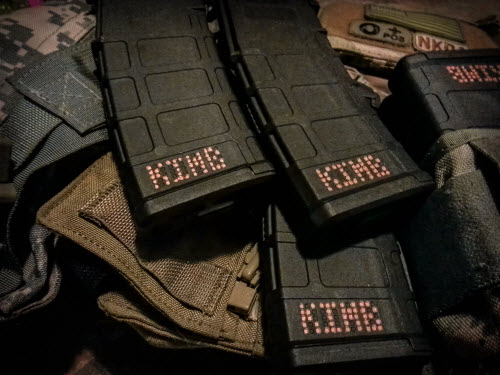 Magazines are a critical component in all our magazine-fed weapon systems.  However, there is a lot of myth, ignorance, and misinformation that surrounds them.  Let's go through all the things we need to know about magazines, and set the record straight.

How many magazines should I own?

You should own at least 6 magazines for each magazine-fed gun you own.  There are several reasons for this, but the simplest one is pragmatic - if you seriously intend to use, and thus train with, your firearm, you're going to need at least several magazines to make this efficient and practical.  You also never know when they will stop making the gun, and the magazines will become hard to find, or unavailable.  For some mission environments, such as a post-disaster, you may need to drop expended magazines without a way to replace them.  Six magazines is a good place to start, and you should factor this in to your initial purchase price.

For some uses, and mission profiles, you should have even more.  If you are a soldier, Law Enforcement Officer (LEO), or community defender, you should have several more than your standard combat load.  For example, a basic Army soldier carries 6 spare magazines, plus the one in the rifle, for a total of 7, so they should probably aim for owning around a dozen, minimum.

How long should I expect magazines to last?

You should get used to the idea that all magazines are disposable, consumable items.  The original aluminum M-16 (AR-15) magazine was intended to be used only 8 times before being discarded.  This is another reason you should have plenty of spares.  Realistically, you can probably get dozens, or hundreds, of uses out a magazine, but you should be ready to pitch it at the first signs of trouble.  Higher quality magazines will offer the best chance of a long life.

Magazines are one of the biggest causes of malfunctions in firearms that use them.  I use a "3 Strikes" rule for my magazines.  After a malfunction that I suspect was caused by the magazine, I mark the bottom with a paint marker.  After a 3rd malfunction from that magazine, it either gets thrown in the trash or condemned to a "training only" box.

Probably the most likely cause of a magazine failure is that the metal feed lips get bent, or spread.  This is especially common on aluminum magazines for the M-16 family of rifles, and will most often cause double-feeds as more than one round is able to escape at a time.

How can I take care of my magazines?

You should periodically take your magazines apart, and wipe down all the components, inside and out, with a cloth moistened with gun oil.  This will remove dirt and residue, and prevent rust and corrosion.

Even though it might be dangerous to the lifespan of your magazine, you should train to drop your magazines on the ground while performing emergency reloads, so that you build good muscle memory for combat situations.  You can help protect your magazines by avoiding dropping them straight on hard surfaces (e.g. concrete), and by laying down a moving blanket during your practice session.

Having many magazines, and rotating them regularly, will also help spread the "wear and tear" across a larger number of magazines, so that just one doesn't have to take all the abuse.

What kind of magazines should I buy?

For firearms that are only made by a single manufacturer, and do not have "clones", you should only buy magazines from the original weapon manufacturer.  For example, I recommend only purchasing S&W magazines for a S&W M&P pistol.  The off-brand magazines too-often focus on making cheaper magazines, and that means cutting corners on quality in ways that could put you in jeopardy in a situation where your life depends on your firearm.

For guns that have clones, or are made by many manufacturers following the same standards or plans (e.g. AR-16/M-16, 1911, etc.), you have more options.  With these weapons, there are typically several extremely high quality brands of magazines to choose from.  Your focus should still be on getting the best, most reliable, and most robust magazines available.  For 1911s, I find that Wilson Combat magazines are of exceptional quality.  For the M-16 family of rifles, Magpul PMAGs perform very well, and the polymer feed lips tend to be very resistant to spreading or damage.

Can I paint and mark my magazines?

You should not paint any portion of a magazine that actually goes into the magwell of the weapon.  The paint can increase the size of the magazine slightly, making it fit more snugly and not drop free, and the paint may cause additional friction, especially when heated.  You can paint the exposed portion of magazines, especially for rifles, in order to better camouflage them, without any issues.

It's also smart to mark your magazines, especially before you attend training courses with them.  If you're not comfortable with putting your name on them, you could just use some other type of identifying mark, such as two X's on the bottom with a paint pen.  Magpul Gen-3 PMAGs even include a matrix of recessed dots, that you can use to create custom marks, as seen in the picture above.

In either case, be sure to use a paint that will resist the harsh chemicals used to clean and maintain your weapon systems.

Magazine interchangablity is the ability for a magazine from one weapon to fit in, and be useable by, another weapon.  For example, all soldiers that carry one of the M-16 family of weapon systems is able to use their magazines in any other soldiers' M-16 weapon.  This is important for all soldiers, LEOs, and home or community defenders, since it may become incredibly important to consolidate or redistribute ammunition in the course of, or immediately following, a combat engagement.

Should I use standard or extended capacity magazines?

The standard capacity magazines for any particular firearm are often ideal, for reasons that may not be immediately obvious.  For example, while extended-length or drum magazines for a rifle may add desired ammunition capacity, they often bring reliability issues or make it difficult to shoot the rifle from the prone position.  Take note that I am referring to the standard capacity magazine that was designed to come with the weapon (e.g. 30 rounds for M-16 family), not the political "high-capacity magazine" rhetoric that is typically quite arbitrarily decided.

There may be some practical exceptions to this.  It may make sense to carry an original manufacturer's extended pistol magazine as your spare reload(s), since while an extended magazine would make the pistol large and difficult to conceal, the extended magazine may carry easily on your belt and make little difference when it's in a pistol that is in use.

Can I leave my magazines loaded?

Yes, your magazines will be fine if you leave them loaded.  I've confirmed this with several magazine manufacturers, and through personal experience.  By design, and with the aid of modern metallurgy, the springs in modern magazines will retain the necessary force to function correctly, even if stored for long periods fully loaded.

It's worth noting that Magpul PMAGs (some models) come with a storage clip that covers the feed lips.  If the engineers that designed the magazines recommend using these when storing the magazines loaded for extended periods, then I echo their recommendation.

Why do military M-16 magazines have different colored followers?

The military has used different color followers to differentiate between improvements and generations of magazines.  After the original black color, the military switched to an improved green follower, and most recently a yet again improved tan follower in 2009.  State of the art, premium quality followers are available from Magpul, as an aftermarket upgrade, in a variety of colors (tan = gen1, grey/orange = gen2, foliage green/yellow = gen3).  Third-party manufacturers use a variety of colors, such as bright orange, just to differentiate themselves, or for other trivial reasons.