Yes, you are at fault for your own victimization. 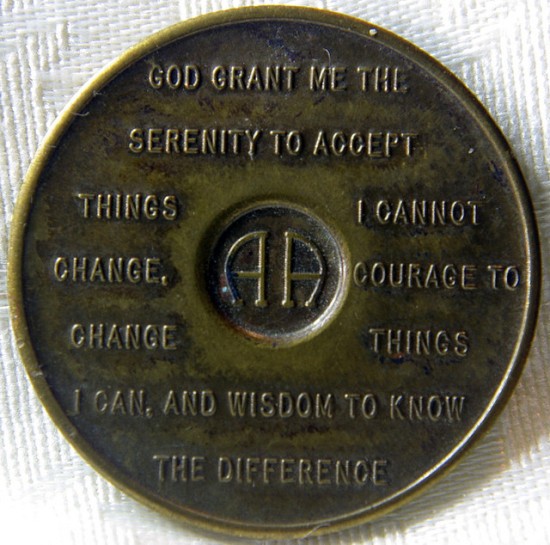 In the image above, you see a copy of the Serenity Prayer, on the back of an Alcoholic's Anonymous challenge coin.  This prayer always gets me thinking about responsibility, blame, root causes, and how they fit into the ideals of our modern society.  These topics become incredibly important, when we start talking about self defense, and other life-threatening situations.  This is important because knowing the true, realistic cause-and-effect relationships between things, instead of the explanation that makes us feel good, is the only way to avoid the problem in the first place, or in the future.

This debate pops us in many ways.  One recent article I was reading was talking about how "a woman wearing sexy clothes does not cause her to be a rape victim".  Yes, it kind-of does.  There are many factors that contribute to the risk-reward incentive for a criminal, and this is just one, but it is one that you control and chose.  True, it didn't make the criminal attack you, but it put you on the radar of this type of predator, and escalated your chances of being their victim.  Remember the old saying, "I don't have to outrun the bear, I just have to outrun you!"?  You don't have to make yourself the hardest target for the criminal to attack, you just have to be less interesting and accessible than the other opportunities available.

Do you see the differences here?  It's not that you always "prevented a crime from happening", as much as you diverted, delayed, or deferred a crime that is very likely to happen, so that now it happens somewhere else, at another time, to someone else, or with less frequency.  You're taking a realistic understanding of the situation (e.g. the criminal does exist, and they are likely to attack a target that presents an opportunity), and you are controlling the components of the equation that you have power over (e.g. the way you dress).  If you just say, "That sexual predator has no right to target me because I dress sexy.", you are rationalizing against a set of values that a rapist probably doesn't share.  While the "sexy dressing vs. rape" discussion is a hot-button issue, ripe with politically-correct gender issues, other analogous situations are no better.  I shouldn't leave my car unlocked and running in the ghetto, just because "that car thief should respect my right to personal property that I worked hard to buy".  I shouldn't post my social security number online, just because "other people have their own social security numbers, and are committing a crime if they use mine".

Do you have the right to dress sexy, leave your car running in a bad neighborhood, and give your SSN out to strangers?  Absoutely.  We must understand, however, that those actions have consequences.  This type of logical analysis is the first, keystone step toward becoming a less likely victim of crime, disaster, "accident", or other undesirable circumstances.  If you don't understand that you are to blame for some portion of the events that often happen around you, you have missed the empowering lesson that you do in fact control impactful elements of your environment.  You should actually desire to be to blame for bad things that happen to you, because it means you also have the power to fix it, or avoid the mistake in the future.

That sounds quite accusatory, but it has a silver lining.  You're in control of more of your environment than you think.  You can be more aware of your surroundings, and anticipate bad situations, in order to avoid the problem altogether, or mount a formidable defense.  You can get training, and practice methods, to react effectively to many different dangerous situations, from using a fire extinguisher to combat gunfighting.  You can acquire tools to supplement your skills, and counter likely threats, such as buying a car with side-impact airbags, or carrying a concealed firearm or other weapon.

However, the secret is not in what you can or can't control.  While you can make sure all the candles in your house are put out before you go to bed, there isn't much you can do about being rear-ended while you sit stopped at a traffic light.  The secret is gaining the "wisdom to know the difference", and doing something about it.  There is no better time to start then now.