Many people have different goals in mind for their security and preparedness.  Sometimes this leads to assumptions and confusion, or even criticism of others' goals, all of which is typical in an industry that prides itself on being ready to confront the unexpected.  In this multi-part series, we'll go into detail about understanding more about goals, and creating your own.  First, lets look at how a preparedness goal can come about and be characterized, and then explore some questions about those goals.

There are a wide range of dangerous situations that might present themselves to us, in our lifetimes.  Below is a chart, illustrating a random selection of events, and positioning them based on how likely they are to happen to us, and how dangerous they are to us when they do occur.  I call this the "Kimble Principle of Disaster Preparedness", just because I'm humble, and always wanted to name something after myself.  :-) 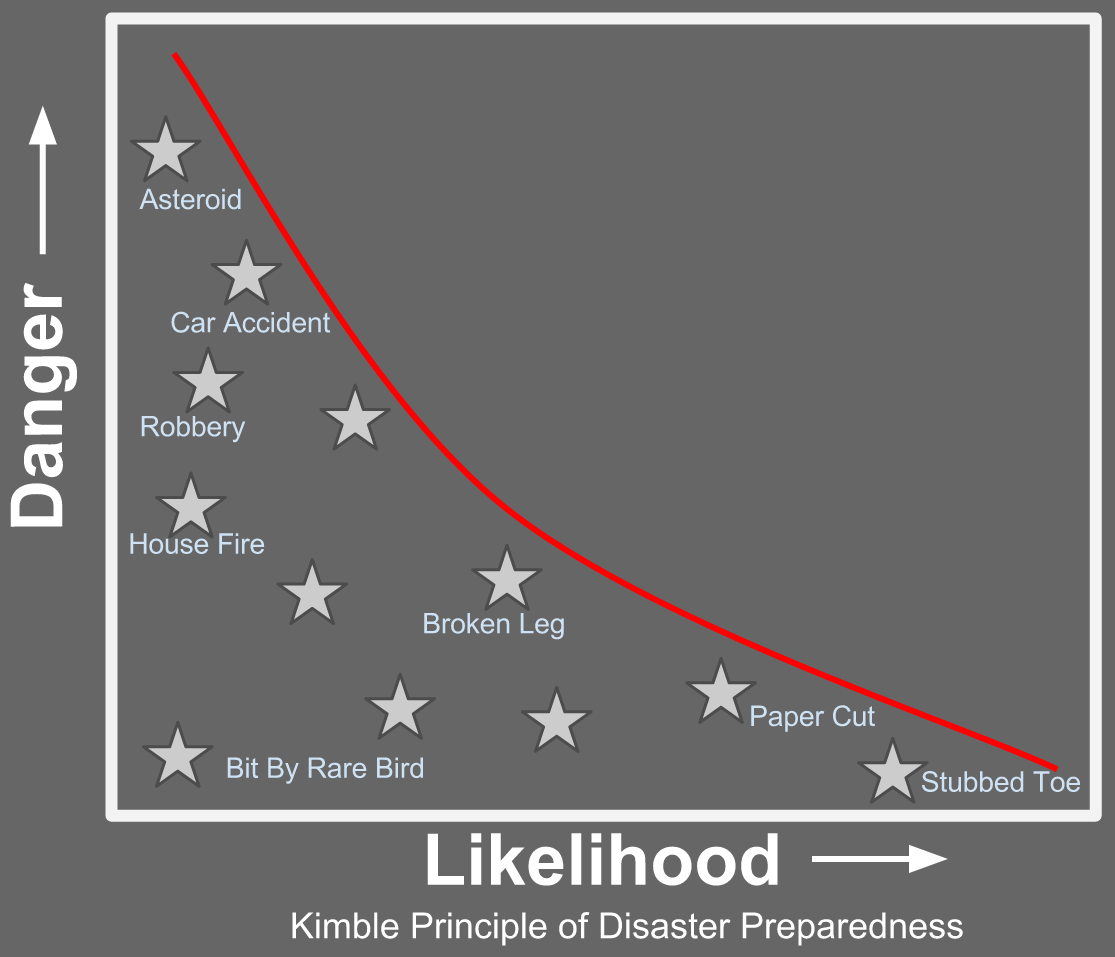 So let's examine a few:

There are an infinite number of other events you could plot on the chart, but there are a couple key principles to recognize.  In order of decreasing likelihood:

If we are striving to be consistent, and not paranoid, we need to decide which unfortunate incidents we must "prepare for".  For example, we probably don't need to "prepare anything" to survive a stubbed toe, or rare-bird bite.  So there is actually a lower limit of things that we essentially ignore, which I will call the "Danger Preparedness Threshold".  Let's put that on our graph, below, where it is represented by a horizontal line, above which are all the events we consider serious enough to warrant our attention, and require preparation to mitigate the negative effects. 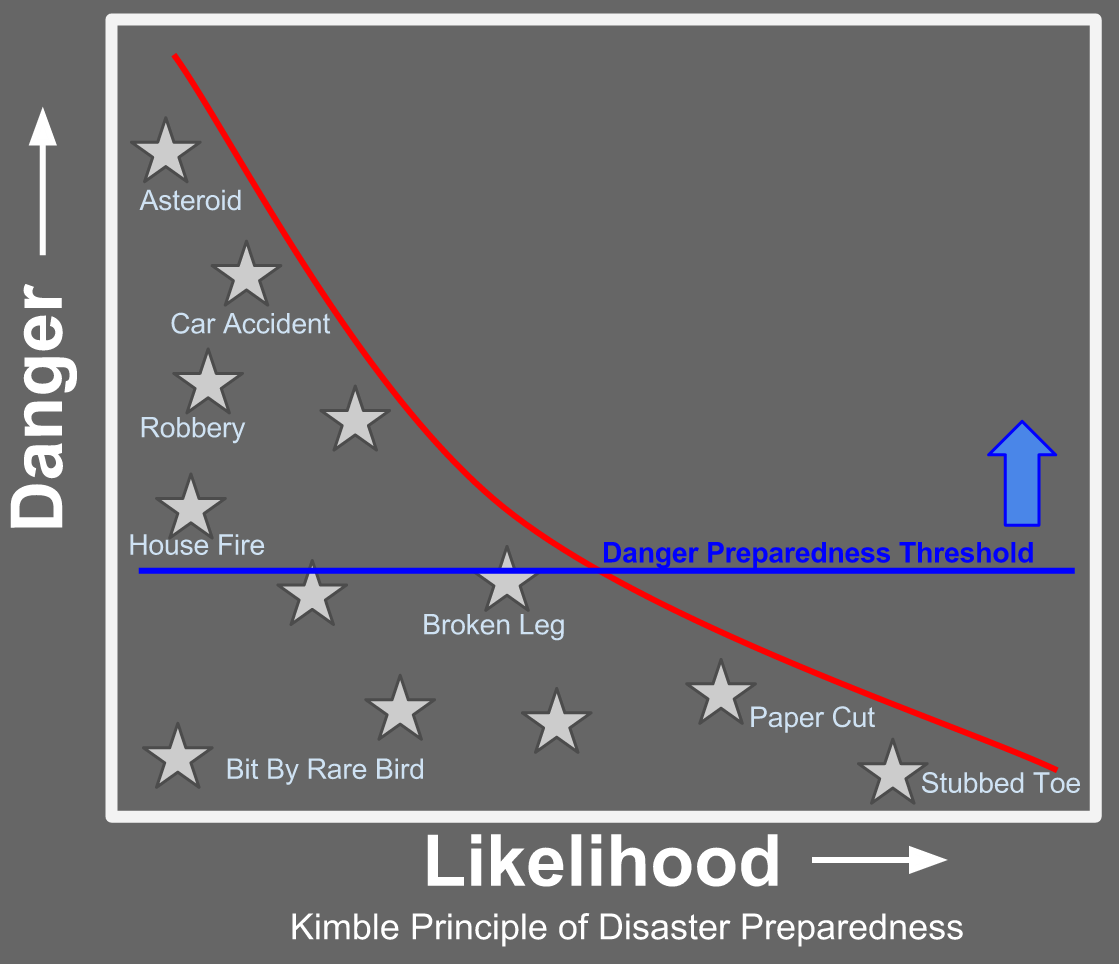 The next step, then, is to decide how unlikely of an event to ignore.  In other words, where do we draw the line as to the most-rare event we will bother preparing for.  I call this the Likelihood Preparedness Threshold, and we'll draw it as a vertical line on our chart, where include everything to the right of the line. 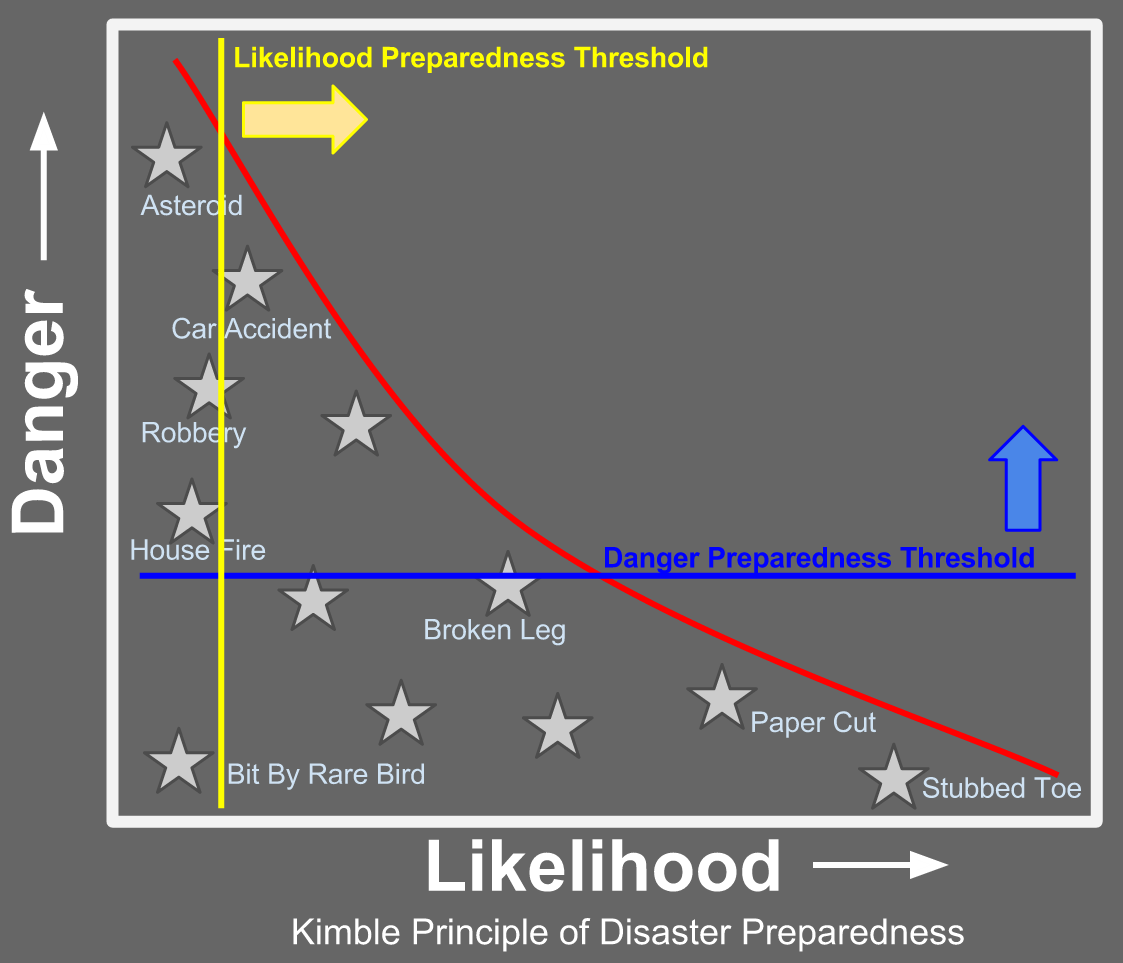 So now we've actually ruled out, in our thought experiment, the house fire, along with the asteroid attack.  We just don't do anything to address those issues, because we assume they are too unlikely to allow them to compete for our precious, limited resources.  We shouldn't go around digging 10,000 ft. deep underground asteroid shelters, if we are highly likely to die in a car accident, because we don't wear our seat belts or have airbags.

What we are left with is our Target of Preparedness zone, in green below.  This is the collection of situations that we have decided is the focus of our preparation efforts and limited resources.  These events are dangerous enough that we feel it necessary to prepare for them, in order to be able to successfully weather the effects, but also likely enough to occur that it's deserving of a slice of our small resource pie. 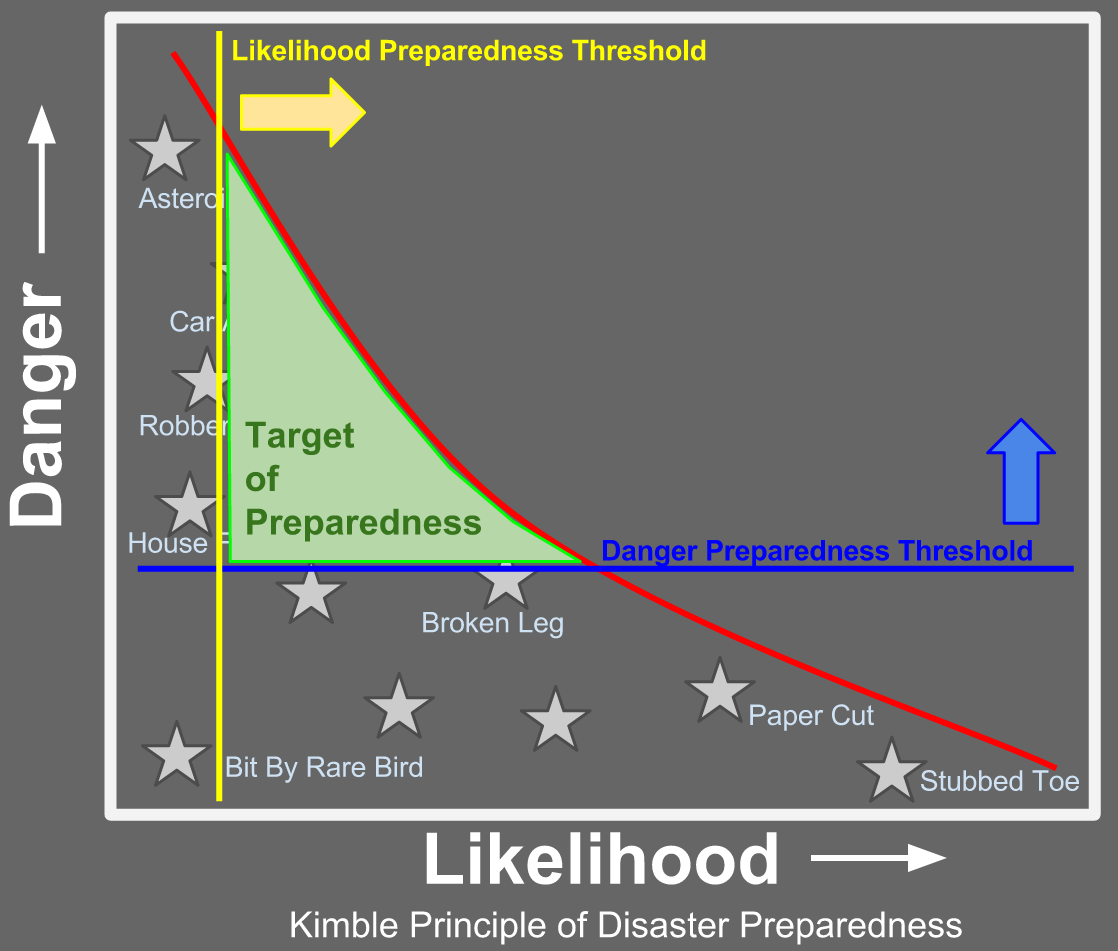 Of course, reality isn't nearly as clear cut as this graph.  Where do your lines exist?  Are they clear, or very blurry?  It can help to gauge some situations that you have strong opinions about, and use them as reference points for comparison.  For example, did you make a special effort to buy flood insurance on your home, even though you live in a low risk area?  If so, then you could use that as a benchmark, and ask yourself "Should I be storing food in a 72-hour kit, to weather a severe storm, that is likely to occur in conjunction with a major flood?", or "Should I get an alarm system for my home, which is more likely to suffer a break-in than a flood?".

Understanding this selection process also let's us understand how our values compare to others'.  Many people live in ignorant bliss of the dangers around them, and are caught completely off-guard when trouble arises.  Those people will often be very critical of a "prepper mentality", because they have very different Danger and Likelihood Thresholds.  They are essentially saying "The risk of a flood is so remote, that I consider you foolish for worrying about insuring against it."  And that's ok.  We all have the right to decide for ourselves how best to protect ourselves, our loved ones, and our property.

What this ultimately helps us with is consistency.  We want to make sure we are carefully considering the risk from dangers around us, and making wise decisions about ways to address them.  We want to do this in a logical, and consistent manner.  Using this system to define our goals, we can be more informed, organized, and efficient in accomplishing them.