Steel reactive targets: Safety and use 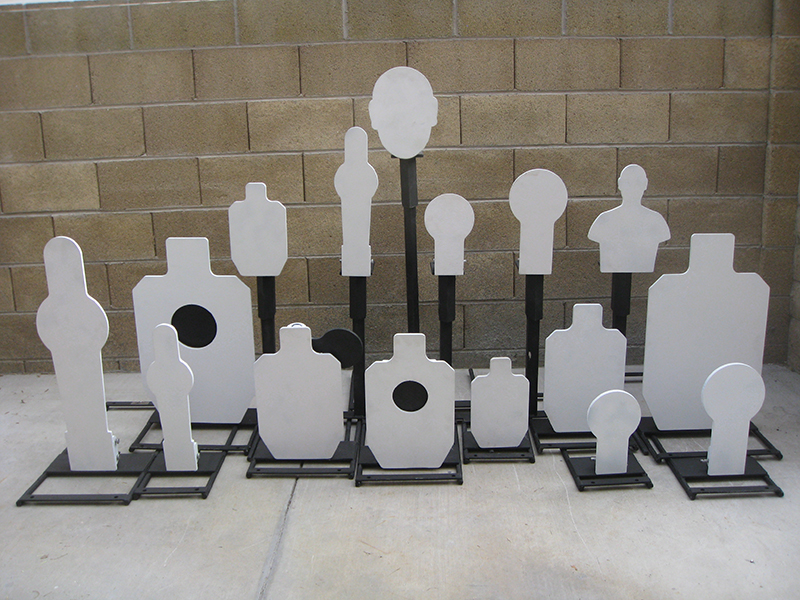 There are presently a variety of steel targets on the market allowing a wide range of firearms training techniques. However, many of these targets do not provide adequate protection from bullet splatter (the bullet fragments that are reflected when a target is hit), so accidents can occur. It is important, therefore, that the user know what factors make training on steel targets as safe and effective as possible.

When shooting steel targets, a "splatter zone" appears. This zone is the area in which the great majority of bullet fragments eventually wind up. The total amount of splatter in this zone is primarily dependent on the following four key issues: 1) Angle of deflection, 2) Target hardness, 3) Bullet design and 4) Target placement.

The type and design of a steel target determines the angle of deflection. Testing for angle of deflection is done by shooting a steel plate target surrounded by a plywood box. After shooting numerous rounds, the path of the bullet fragments is assessed by examining the marks left on the plywood. As the bullet shatters on impact, the majority of the fragments spread out at 20-degree angles from the plate surface. This area, which forms thin triangular shapes to the left and right of the target, is referred to as the "splatter zone." It is not a safe place to be as a full 95% of all bullet fragments can end up here. The remaining area, including the shooter, is referred to as the "safety zone," and receives only a small portion of bullet fragments. Although the safety zone is not absolutely safe, with proper protection, normal training can be carried on without undue risk.

The hardness, or tensile strength, of a target measures the amount of force that can be applied to the steel before deformation or damage occurs. Hardness is most commonly measured by a Brinell number ranging from 150 on the soft side, up to 700 on the hard extreme. While the average target is made of the cheaper steel with a Brinell number of 265, some targets have a Brinell number over 500 and can withstand repeated .308 rounds without deformation or damage. Intuitively, it is apparent that a harder steel target will last longer. More importantly, a harder steel target is actually safer. In repeated testing, hard targets produced very consistent splatter patterns and returned little or no bullet material back to the shooter. Softer targets deformed sooner and often resulted in extremely unpredictable splatter patterns. Specifically, many fragments were larger and traveled in virtually every direction, effectively rendering the safety zone non-existent. It is recommended, therefore, that steel targets be made of the harder steel. Initially they will be more expensive, but, based on longevity and safety, they will be more cost effective in the end.

A high quality, higher power factored ammunition is essential to reduce splatter. Simply stated, to minimize the size and pattern of splatter, drive the projectile harder. Consequently, a lead bullet with a low velocity is the worst option for steel target training. For safe training, it is recommended that only higher power factored bullets be used. A desirable round to produce consistent splatter is a jacketed hollow-point with a velocity of 1225 fps. Another issue is the "correlation factor." This generally refers to how well a bullet holds together to give controlled expansion and penetration. In the case of steel target training, the best bullet is a frangible style round. The high velocity, frangible design of such bullets creates a predictable shattering effect on impact.

Even with the best targets and bullets, training can be dangerous if targets are placed incorrectly. Metal targets should not be placed parallel to each other with out a barrier between them. Splatter from one target could ricochet off another target (secondary splatter), and return to the shooter. Metal targets that are used in a grouping pattern should be staggered so as not to be in the 20 degree angle of deflection splatter zone of another target. Placing plywood to the sides of each target easily solves both of these problems. Because the wood is soft, it will absorb the splatter and not cause dangerous secondary splatter. The wood will, however, need to be replaced frequently to be an effective barrier. Another cause of secondary splatter can be large rocks or concrete. The best surfaces are made of sand or fine gravel. If concrete is used, it should be covered by wood or pea gravel.

Since splatter can only be minimized and never totally eliminated, proper eye protection must be mandatory on all firing ranges. Eye protection should be OSHA tested and have side protection built in. Long sleeves and hats are optional but recommended. Instructors and observers should stand behind the shooter and obey all safety precautions as well. In short, training on steel targets can be safe if done properly. Buy your targets from a reputable manufacturer, use high velocity, frangible ammunition, place targets correctly, and take proper safety precautions.