Bug out plans and vehicle considerations 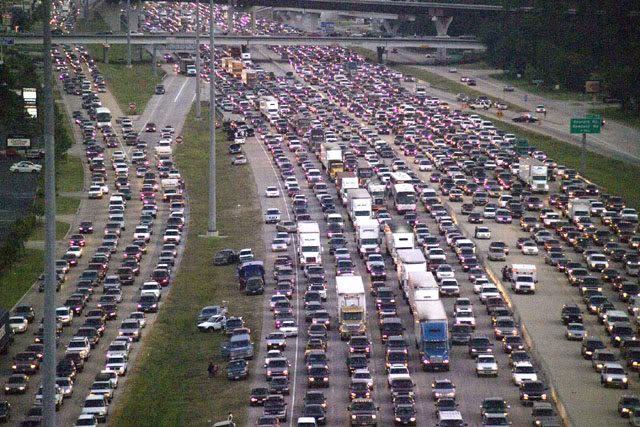 Any good disaster preparedness plan includes measures to escape the affected zone, also known as "bugging out".  In the picture above, we see a scene from the 48-hour traffic jam created in Texas, as residents attempted to flee Hurricane Rita in 2005.  As that episode illustrates, the challenges go far beyond keeping snacks and jumper cables, in an emergency kit, in your car.

There will be many thousands, possibly millions of people mass-evacuating simultaneously.  Our roadways are sensibly designed only to accommodate a small portion of the populace being on the road at one time, so like they found out in Texas, the road system quickly becomes completely overwhelmed.  As this happens, the problem exacerbates, because the slower traffic is moving, the fewer vehicles are making it to their destinations off the roadways, as more vehicles pour in.  Let's examine several options to overcome the problems.  No single solution is is going to work in all environments, geographies, and disasters, so it is probably wise to prepare for more than one.

Be prepared, and leave quickly

One of the simplest responses is to be prepared to go at any time, and leave immediately at the first signs of trouble.  You can easily get in the habit of never letting your vehicle's gas tank get below 1/2, keeping a couple extra cans of gas in the trunk or on the roof rack, and stocking a duffle bag with supplies.  However, there are many pragmatic problems.  First, you're going to have to be ready to look foolish and paranoid, as you "respond" to false-alarm storms and disasters up to a couple times a year.  You also need a job, probably a salaried position, that is flexible enough to let you take a day or two off during those times.  You have to round up all your family members and get on the road, before anyone else realizes what's happening, because if you wait too long you'll just be stuck in the mess, which requires a vigilant attention to sources of news and information.  With certain types of very obvious, rapid-onset disasters, such as a terrorist attack, it may not be possible to get out fast enough.

Most of the time, when people talk to me about their bug out vehicles, they like to show off their shiny luxury SUV.  Maybe it has a few accessories, like slightly-bigger-than-stock 33" tires, a roof rack, trailer hitch, etc.  I hate to tell you, but you're not going anywhere in that thing.  The problem is that it gets less gas mileage than a car, and despite being 4WD, it's not really big enough to just go straight cross-country.  The first 3-4' deep ditch that you come across is going to put an end to your journey.

If you want to truly be able to just head off straight in some random direction, you must be prepared to deal with all the obstacles along that path.  They will include a multitude of natural and man-made barriers.  Here are some examples:

As you can see, those fancy rims and 33" tires aren't going to help.  If you're going to overcome these obstacles, you're going to need to go big, really big.  You're going to need to push the limits of what is possible in standard light-duty (1/2-1 ton) trucks, in order to run tires around 4' tall.  Above this, it wouldn't be silly to look at vehicles that have no trouble crossing these barriers, such as military 6x6 M35 "Deuce and a half's", or construction equipment such as wheeled front-end loaders or tracked dozers and excavators.  Alternatively, you could use vehicles small enough that those obstacles can be negotiated, such as dirt-bikes, quads, or even bicycles.

If the roads are going to be stopped up, why not go by other means of travel?  If they fit your geography and living situation, you can use boats, gyrocopters, paragliders, and hovercraft.  These vehicles are all designed specially to work on water or in the air.  While the air and water are not likely to be crowded, various disasters may make these methods dangerous.

It may be possible to design an evacuation route that use what are essentially roads, but aren't socially labeled as such.  For example, there may be a popular bike path nearby that cuts across several towns, that is wide enough to drive on, or you might even be able to drive in the oncoming lanes of the real highway.  Dirt "back roads", fire paths, utility access roads, etc., will be less tempting to softer individuals, however may become impassible if foolishly unprepared people attempt to navigate a mud-hole in their Honda.  Keeping an atlas of both roadways and topographic maps, or a GPS with the same, might aid you in finding a way out.  You should find and test several such routes, long ahead of time, to ensure success.  Almost all of these routes are likely illegal, and cross private property, so you will need to understand the circumstances under which you are willing to risk the travel.

The basic premise behind all of these approaches is that the one thing you absolutely can not do is the same thing everyone else is doing.  Everyone else will be sitting nervously in their car, stuck in endless gridlock, with danger increasing by the second.  You have to come up with a solution that takes you out of that traffic, and puts you safely on some other route, or headed to some other destination.  This is an asymmetric "Rock, Paper, Scissors" approach.  If your opponent throws rock, you can't throw bigger-rock and win.  You need to do something else.

Leave a comment below, and let's hear your thoughts on bugging out.