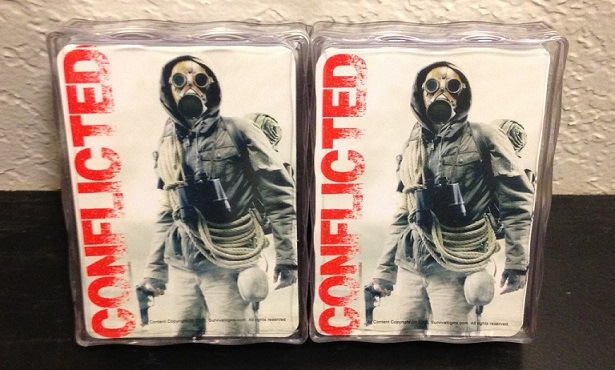 A couple weeks ago I happened across the website of Conflicted: The Survival Card Game.  The cost of a deck is $15, so I ordered one, and they showed up quickly.  The basis of the "game" is that the cards portray various challenging or morally difficult scenarios, and you should discuss them with your friends and prepper buddies.  The hope is that through these discussions and thought experiments, you'll gain valuable insight into possible Courses Of Action (COA) to take, should analogous situations ever face you in the future.

I had optimistic expectations of the deck.  I'm easily willing to pay $15 to be able to flip through a few dozen novel scenarios, so that I don't have to try to awkwardly find answers to problems I created myself.  Unfortunately, I've been mostly disappointed in the product.

I'm really reading into it here, but it seems like most of the scenarios were written by people with little training or experience, possibly using cliche stories pulled from movies.  The majority of the cards set up highly artificial traps and moral dilemmas, that would be nearly impossible to ever find yourself in, often because the best solution(s) to the problem is simply prohibited by the text of the card.  Other cards either make little sense [to me], or must have been written based on some assumptions about survival and combat that are very off-base.  I won't go into specifics, so that I don't ruin the effect of seeing them for the first time if you do decide to buy them, but I generally find myself spending more time trying to figure out how the situation is even possible, or what drastic tactical failures occurred to bring you to that point, than I do trying to solve the actual stated problem.

Lets look at a couple example cards that Conflicted displays for free on their website, and you'll see what I'm talking about. 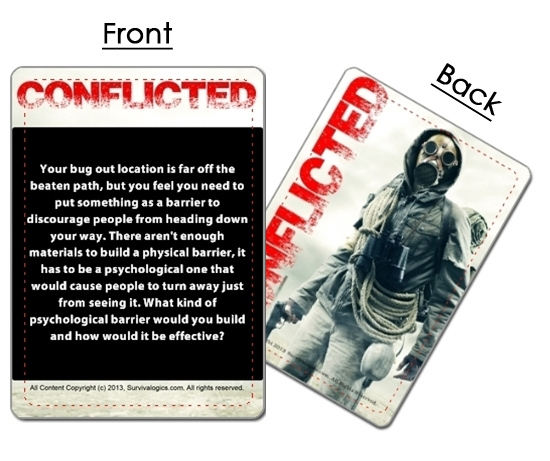 Ok, so my bug out location is far off the beaten path, but somewhere there aren't enough materials to build a barrier?  How is that even possible?  Ask any combat engineer and they'll tell you that the #1 barrier and bunker material is DIRT!  They stop tanks with the stuff.  So why even worry about what type of psychological barrier to create, when I can just actually build the physical barrier?

But let's say we play along.  I get the feeling the card wants me to describe how I'm going to put a bunch of severed heads on pikes, as a warning to others that may come.  The best psychological barrier is probably just to do nothing, and let my unnoticed, "off the beaten path" retreat remain unnoticed.  It would have been more useful to have people actually talk about the types of physical barriers they could build with dirt, rocks, logs, and found objects, since that is what they would likely actually do. 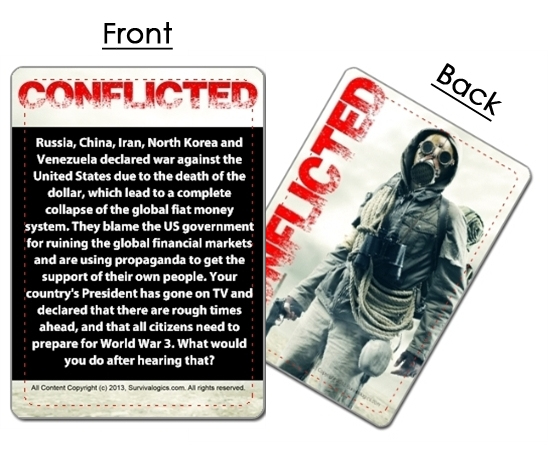 Russia, China, Iran, and North Korea all declared war on us?  What do they plan to do?  The "whoopass" part of Iran's navy consists of 8 ships that probably fit in the cargo hold of one of our carriers, and one of which used to be a yacht that they have now put missiles on.  America spends more on defense than the next 10 countries combined, which includes Russia and China, and Iran and North Korea aren't even on the list.  The point is that the USA is gigantic, and covered with gun-toting Americans, plus they have to get past our navy and air force to get here.  So how exactly do these countries expect to come here to wage war and succeed?

If we try to answer the question the card asked, we probably just come to the conclusion that it's time to enlist in the military, if we aren't already in it.  In any case, how is this helping us learn to make effective survival decisions? 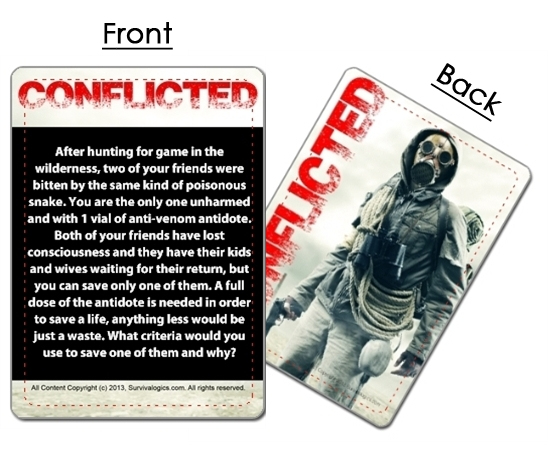 Again, before we can even get to the question on the card, what pops into my head is, "What the hell were you two idiots doing, that you both got bit by two different poisonous snakes of the same species?"  Even as far back as the 1960s (the furthest back I could find numbers for), you're about 9 times more likely to die from being struck by lightning than being bitten by a snake.  Snake bites themselves are incredibly rare events, and your chances of dying from it are probably around 2%, using the example of other less-developed nations in the Americas.  So how is it even possible that this situation is real?  It would take monumental feats of malice or stupidity just to get the two snake bites, and then the chances of adults dying from it are still small.

So then we move on to the predicament.  We only have one vial of anti-venom.  Where exactly did we get that?  I don't own any snake anti-venom.  Do you?  Where do we plan to get some during a collapse?  At the very least, something very unusual is going on here that we should be told about.

Once we finally start trying to crack the moral dilemma, we find out that we probably already answered it.  There are a dozen other cards in the deck that set up one of these same situations, impossible to get into as they may be, that basically boil down to "A few of your friends are about to die.  Pick the one you save, and tell us why."  Whatever your reasoning is (e.g. choose the most valuable person, choose your favorite, whatever), you only need to answer it once, and the rest of the similar cards are mostly pointless repeats.

I give this product a C-.  It had so much potential, that it's really a shame it isn't better.  It does give you a variety of scenarios to talk about with your friends, which itself may be worth the $15, but you'll need to overlook the absurdity of the scenarios to begin with.  My biggest worry about this product is that it was written by people that don't know what they are doing, and that if it gets into the hands of other people who don't know any better yet, it may actually have a negative effect by giving them a false sense that they are gaining realistic knowledge.  It sets up a paradox, where you need to know enough to understand how ridiculous the scenarios really are, but if you know that much then the situations themselves are probably not that novel or difficult to solve.

If you own a deck, leave a comment below about what you think of them.